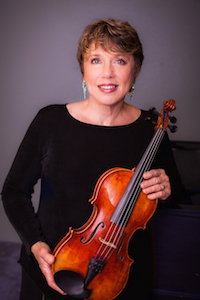 Cynthia Morrow is a graduate of New England Conservatory of Music, holds a Master of Arts in Psychology from Antioch University, LA, and a Doctorate in Clinical Psychology from Ryokan College, LA. She studied violin with Gabriel Nevola, Samuel Applebaum, Robert Brink, and Cecylia Arzewski, and was a member of Joseph Silverstein's Master Class. She studied chamber music under Rudolph Kolisch, and conducting and composition with Gunther Schuller. She was a member of the Portland Symphony in Maine under Paul Vermel, played principal viola in Los Angeles with Downey Symphony, LA Jewish Symphony, California Chamber Orchestra, Symphony in the Glen, and was a member of Glendale Symphony, American Ballet Theater Orchestra, and LA Civic Light Opera. Morrow has been a member of The New Ysaye Quartet, Tsunami Quartet, Luminarias Duo, and Gaia Viola Quartet. She has performed in Las Vegas and in the Hollywood studios as a violinist, violist, vocalist, and has been a composer, award-winning singer/songwriter and lyricist for more than thirty years before moving to Kirkland, WA. In 1979 she conducted the World Song Festival in Seoul, Korea, where the song she co-wrote with Lennie Stack won top honors. She conducted string orchestras at Kirkland Community School, conducted and coached for Bellevue Youth Orchestra and Cascade Youth Symphony, and opened her own teaching studio, Violin & Viola Studio of Kirkland, turning out hundreds of string players, her students winning First and Second Place in State on viola year after year, and filling concertmaster and principal chairs on both instruments in their schools and youth orchestras.

Dr. Morrow and her husband Gary Hattal moved to Whidbey Island permanently in 2014. She now teaches, performs with pianist Sheila Weidendorf in Deux Femmes Musiques, is a member of Island Consort, has played with and been on the board of Saratoga Orchestra, and has been Music Director and Principal Conductor of Whidbey Island Community Orchestra since 2015.

Gabriela Garza Canales is a Mexican conductor living in the United States. In 2018, she stepped in on very short notice to conduct the Curci Concerto Romantico, when Music Director Cynthia Morrow took over the violin solo from a guest artist who had a health issue and was unable to perform. Ms Garza has continued as Assistant Conductor as her prominence has grown. In late 2020, she became the Music Director for Poulsbo Community Orchestra and assistant at Seattle Youth Symphony Orchestra.

Dr. Garza has recently completed her doctoral studies at the University of Washington’s School of Music, where she studied under the mentorship of David Alexander Rahbee. From September 2017 up to June 2020 she was co-conductor of the UW Campus Philharmonia Orchestras and assistant conductor of the UW Symphony Orchestra. Additionally, Ms. Garza served as a guest conductor for the UW Modern Ensemble.

We congratulate Gabriela on her new positions. At Whidbey Island Orchestra, she has enlivened rehearsals, honed our musical skills, and inspired us in her concert conducting.