The mission of the Whidbey Island Orchestra is to foster a positive musical experience for its musician members and for our local community. We perform for the love of music and for the opportunity to spread the joy of music to Whidbey Island audiences. 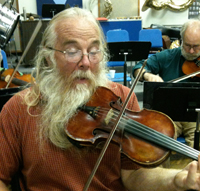 The Whidbey Island Orchestras (both the Youth and Community Orchestras) developed over the last several years in the minds of several local string teachers. In October of 2006, Roxallanne Medley, Kat Fritz, Legh Burns, Ward Beebe, and Karis Mills had their first preliminary meeting and started to put ideas on paper and work out some of the details of how to develop this important idea. We met again in May of 2007 and began our work in earnest. There were many things to discuss: rehearsal and concert space, dates, finances, music, auditions, standards, conductors, advertising, handbooks, and how to join the two orchestras into one cohesive organization.

The meetings were long, but we wanted to put together the best orchestra experience possible . Each of us contributed something different to the meetings as we had varying ideas and concerns. This led us closer to our goal. Finally the day arrived when we auditioned our bright, new youth orchestra members. It was an exciting day for everyone. There was no turning back. It was actually going to happen!

Our first rehearsal was September 27, 2007. We had a good roster for both the community orchestra and the youth orchestra. The experience was new for many involved- both frightening and exciting. As rehearsals went on, we made new friends, learned from our experiences, and had a great time making music with others. Our first concert, November 15, 2007, was a success in our eyes. We knew that as we played together, we would improve, which has proven to be the case. Students have taken a new interest in practicing, and adults have found a place where they can use their talents. It has been a wonderful beginning, and we look forward to the years to come.